For the latest batch of MultiTrack  backing tracks we’ve chosen 10 recent big songs and given you guys a good mix of Chris Tomlin, Hillsong, Newsboys, Paul Baloche, Lincoln Brewster and Jared Anderson. Interestingly we’ve chosen to alter the key on nearly all of them as most are too high in the original key for the average congregation. A description on what we’ve down with each song is below to give you guys some background about the parts. Hope you enjoy!

Click through to listen to audio samples and to buy.

All Because of Jesus – Casting Crowns / Steve Fee

Great I Am – Jared Anderson

I am Free (Newsboys) – Jon Egan

Today is the Day – Lincoln Brewster

Whom Shall I Fear (God of Angel Armies) – Scott Cash, Chris Tomlin and Ed Cash

Buy all 10 and get an additional discount applied at the checkout.

Here is the lowdown to each of the tracks

All Because of Jesus
This was a track that is fairly unsingable in the most well known version. So we took it down two full tones to C but then took a lot of care to keep the brightness in the voicing so it keeps its sense of energy.

Came to My Rescue
In terms of instrumentation this sounds quite similar to Hillsong’s original version but we changed some of the parts, particularly in the last big choruses to add an even greater sense of tension and release with the song getting bigger and smaller. We also slightly changed some of the song structure to make it a bit more concise and shorter as a version for the average church. Even so to get the full sense of ebb and flow its still a full 5 minutes long, and of course you can repeat any verse/chorus/bridge section you want to within the player.

Cornerstone
This song is going to be around a long time and we wanted to do it justice. So we’ve got male and female vocals with some fabulous harmonies and lots of layered guitar parts to give it that authentic big Hillsong sound. We did bring the key down to Bb to make it more congregationally accessible and again shortened it slightly for usability’s sake (still 6.20!) But the main thing we did we give you two optional endings! So if you want to use the instrumental refrain you can, but if you don’t there’s a bar of dead sonic space after the first ending which easily gives you enough time to jump to the next song in the playlist without it sound awkward.

Crown Him (Majesty)
In this backing track we took the song down a tone to B as again its just too high for most congregations. But we also stuck fairly close to the feel of the instrumentation with lots and lots of guitar/keys/strings layering to get that MASSIVE sound in the bridge.  However we decided not to go for the key change at the end mainly because again unless you’re in a large gathering, most folks can’t hit the notes in the original C# key let alone D#! However with the Worship Backing Band player you can of course manually change the key yourself! Remember – use  the S and X hotkeys to go up or down.

God is Able
This is another song we’ve put down a key to A to make more congregationally singable but still keep the original feel in the instrumentation and the parts. So everything in there including the riffs lead lines and solo.

Great I Am
For this one we took the key down a tone to C but added lots of extra guitar part layering that’s not in the original version to add to the sense of dynamic build as the song progresses.

Offering
Paul Baloche tends to write most of his songs in congregational keys so we kept this track in the original in F and stuck mostly to the arrangement with all the motifs and parts you’d expect. Again there is some extra layering to add to the dynamic but we did change the ending slightly to take out the unusual chords in the album version, just to make it as accessible as possible to the average worship band players.

Today is the Day
Accessibility was the key for this backing track, so we’ve brought it down to C but spent a lot of time on the guitar voicings to give it that Lincoln Brewster feel,  with plenty of  widdle-tastic riffs and licks to keep you busy especially towards the end of the track. There might also be a bit of Keith Urban, Rascal Flatts and Black Eyed Peas influence in there too… We did however take out the solo as it leaves most congregations idle with nothing to sing (not anything to do with us not being able to play it of course… Nope , No Siree!) but if you want to solo just repeat one of our chorus or band sections within the player.

Whom Shall I Fear (God of Angel Armies)
We took this down to Bb again to make it more congregationally singable but crucially we took time to get that same album feel using guitars and keyboards where we assumed most churches won’t have banjo and Dobro players! So that means if you want to replicate those parts live you easily can by soloing a part to pick out exactly what’s going on. Not often easy on Tomlin’s stuff…

I am Free
This was another track that’s way too high for most congregations to sing in the original key so we’ve brought down to C but added a few more layers to make the arrangement even more dynamic. We’ve also added multiple BV voices to the audience repeat in the chorus but put it all into one stem so if you don’t use that part then simply mute it!

We hope you really like the song choice and what we’ve done with the arrangements. Please do comment below to give us any feedback. 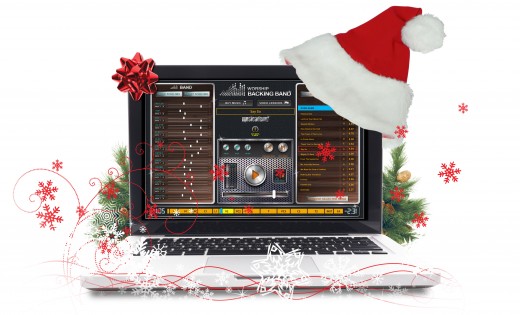 Just a quick update to answer some questions about the 10 Christmas Carols we are recording right now as Multi Track backing tracks.

All  are designed to be used in your Christmas services with contemporary full band arrangements in singable keys and in the same style as all the other backing tracks on Worship Backing Band –  I.e not organ music! From the 10 there’s a real mix of big anthemic versions, mid tempo numbers and more gentle carols too. So in other words we’ve tried to give you a real mix of fast and slow stuff to help your carol service ebb and flow and follow a journey.

Big songs include Tomlin-esque Joy To the World and Angels from the Realms of Glory. Brenton Brown’s Joyful Joyful adds in a new contemporary chorus section. O Holy Night takes some cues from Crowder and adds a sense of tension and Hark the Herald, O Come O Come Emmanuel and O Come all Ye Faithful are great mid tempo versions. Silent Night is very gentle but still with a full band arrangement but then The First Noel is really fun and up so there’s plenty of contrast.  And lastly we’ve included Paul Baloche’s Christmas Offering as a more modern song for churches that want to bridge the gap between carols and their regular contemporary worship songs.

But all chosen because they have genuinely worshipful themes and lyrics, not just songs about snowmen. Although I reaaallly did push hard for Mariah Carey’s All I Want for Christmas (joking…well maybe not).

Recording should be finished this week so they should be in the store at some point in October. We’ll keep you all posted as to exact dates and progress. They’ll be available individually and we’ll do a great deal as a pack of 10 which should last you a number of Christmases!

Lastly, even if you have a full band and don’t use them as backing tracks, using the parts with your band could take the time and headache out of building instrument arrangements for your Christmas services.

1 Angels From The Realms of Glory

Below are some of the reviews when we launched the MultiTrack Player for the first time (it’s got even better since then!)

Over on the Worship Backing Band Facebook Page Eric Simpson said “Had a play around and is FANTASTIC! The ability to change key & speed hits the mark” He also said that the speed is “Massively improved“.

Charmaine Wistad said “We have re-installed the new version with jump feature. THANK YOU! We used it quite a lot in rehearsal.” (We’ve also enabled another NEW FEATURE in the player which is the ability to instantly jump to a new song section. This is a really helpful feature for band rehearsals where you need to practice particular sections of songs.)

Kevin Wilbur said “The tempo and key change options are great, as well as the load times for songs! Thank you to you and the whole WBB crew who have put so much time and effort into creating a great product like this.  You are a blessing!”

Rae Runge said “Thanks so much for listening and making a great product even better!!!”

Jen Flatt Osborn said “Thank you for such incredible prices. You have created such content for so little in return.“

Clifton Worley said: “To fellow worship leaders…This is an incredible tool. You need to check this out. If you have looked at the prices of multi-track stems before, you will know this is CHEAP!”