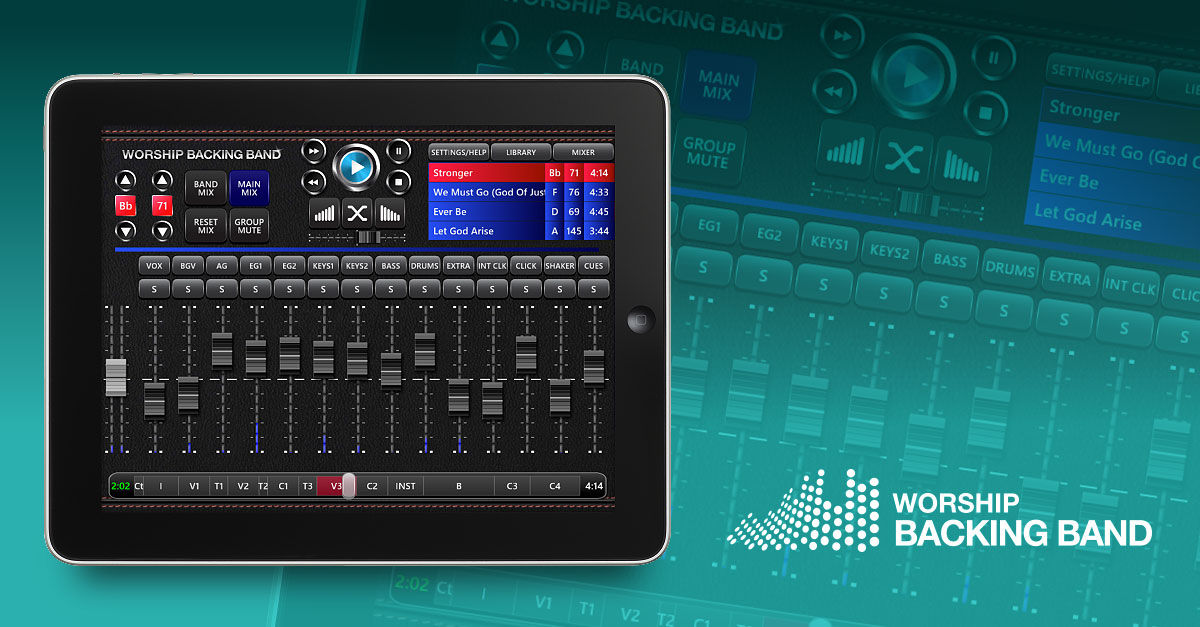 Technology in worship is here whether you like it or not and if embraced it can serve as the paint brush to create new sounds.

In the last century technology has driven and redefined the music we make. From electric guitars and keyboards to recorded elements from synths, decks and loops all integrated into live music.

When it comes to live worship music, the introduction of the drummer’s click track transformed the sound of worship songs. And the wheel has turned again with backing and multi tracks used alongside, or instead of, live worship bands.

Even churches with lots of musicians use backing tracks.

And even big secular bands use tracks during live performance. That doesn’t mean that they are miming. It is simply because they cannot achieve the full sound they want with a limited number of musicians. An album track may have multiple guitar and keyboard parts on it – far more than a single guitarist or keyboard player can manage in a live setting.

In a church context it is not just smaller churches with missing musicians that use tracks to fill out the sound, there are plenty of churches with full compliments of musicians using tracks to produce more of an ‘original album’ sound that simply can’t be recreated with a 5 or 6 piece band.

I talked to worship leaders about their experiences of working with backing tracks (you can see the original conversation thread on the Musicademy Facebook Group). Here is what I found.

Mark Snyder, a song writer and the software developer behind Worship Backing Band’s Transition MultiTrack Player, says that worship tracks can help your team get better “it is like how a strong choir member can help the weaker ones sing better”.

Kent Wade has been the Pastor of Worship at The Chapel EFC in St Joseph MI for 18 years. He says that the experience of playing to a click has been a game changer, especially for less experienced musicians. “When you add a track to the live band, not only does everyone play ‘in the pocket’ better, but the supplemental parts help the band sound more full as well.”

Kent says that the only problem is when the worship leader misses an entrance or does something different to the track such as cutting an instrumental bridge in half. He says that “It’s then that we have to kill the track, listen extra hard to stay together, and follow the chart to the end.”

But Jonny McGeown, a worship leader from Belfast, Ireland has found that with tracks mistakes are minimised and the congregation less distracted from worshipping and tracks have helped improve musicianship. He implemented a move to in-ears and the use of tracks and said that “Understandably, my fellow volunteer musicians took some time assimilating click as they played for worship – but each of them has become more aware of ensemble and has improved both their technique and musicianship”.

Don Dickson, a worship leader in Chesham, UK says they primarily use backing tracks as practice tools to hone playing skills and also learning a new song finding that the jump to a segment feature is much better than searching a recording. For live performance he says that “If only a small number of musicians is available then just adding a core instrument such as bass or drums can be just what is needed”.

Dwane Woodard from Alabama feels that churches should be wary of relying on technology. “There is a difference between having an acoustic guitarist on stage and having the support of an entire invisible band, vs having a full band on stage and supplementing keys and percussion.”

I spoke to Richard Fletcher who admitted to being something of a sceptic on the use of tracks. He was concerned that tracks would mean in-ears were required – which had resource implications. He was also worried about the level of technical knowhow required to run the software as well as fearing a loss of flexibility when being “beholden to playing it as on the backing track”.

Richard’s comments are interesting as they reveal a lot about people’s perception of backing tracks. Perceptions I’d gently want to challenge.

The pros of working with MultiTracks

So to summarise some of the pros of working with backing tracks:

The cons of working with MultiTracks

What alternatives are there to MultiTracks

MultiTracks are not for every church. And for those without any musicians (and very limited budgets), Split Tracks may be a better alternative.

Split Tracks feature fully adjustable vocals and on-screen lyrics that change in time with the music. They are the simplest to use and lowest cost alternative to MultiTracks.

Split Tracks are available from Worship Backing Band on compilation DVDs and also as individual downloads.